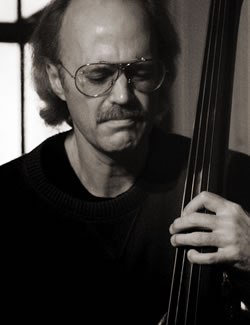 British rock and American soul music were his earliest influences. Early 1960’s AM radio became his first “teacher”. Jeff learned the licks and chords of popular music of the time by listening and copying what he heard. At age 15, Jeff took a job offer to play electric bass guitar in a steadily working band which introduced him to jazz. By age 17 he was teaching himself the acoustic double bass, learning onstage with veterans and peers of the fertile “Twin Cities” jazz scene.

In 1975, at age 20, Jeff left Minneapolis for Philadelphia to join legendary drummer Philly Joe Jones’ then touring group called “Le Gran Prix”. After touring the Eastern seaboard for several months and experiencing the great cities of that coast, Jeff began following leads for gigs which had him living and working in many cities across America including Atlanta, Oklahoma City, Austin, San Diego, and Los Angeles, finally settling with his wife Marcy in Seattle in 1990.

Since his arrival in Seattle, Jeff has embarked on many musical collaborations with Pacific Northwest area musicians. Many of these relationships continue today. Several of these musicians are featured on Jeff’s own recordings and he on theirs.

Since 1991, Jeff has also worked off and on with pianist Jessica Williams with whom he has recorded six CD’s and played major venues such as Jazz Alley and the Monterrey Jazz Festival. Jeff’s work with Williams created collaborations with drummers, Dick Berk, Ralph Penland, Victor Lewis, Mel Brown, and Eddie Marshall, as well as saxophonist Gary Bartz.

Jeff won Seattle’s Earshot Jazz “Northwest Jazz Instrumentalist of the Year” awards in both 2000 and 2001.